Duterte Government doubles debt of the Philippines in almost 5 years 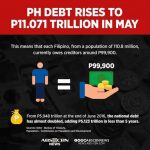 Wow it only took 5 years for the Duterte government to double the debt of the Philippines. The people are trying to hold the government accountable for how they are spending their funds, but no response from the President.

International debt watcher Fitch Ratings kept its “BBB” credit rating for the Philippines, but revised its outlook for the country’s economy to “negative.”
The country previously received a “stable” outlook during its last report early this year.
In a statement released on Monday, Fitch explained that the change in their outlook for the country’s economy was due to the increasing credit profile risks brought by the COVID-19 pandemic and its aftermath on policy-making and economic and fiscal outputs.
Also funny that Fitch mentioned:
Pandemic response. The debt watcher also noted that the Duterte administration’s goal of vaccinating 70% of the population in 2021 is “very ambitious” since only less than 3% have been fully vaccinated as of end-June.

Continue to pray for the Philippines and the coming elections on May 2022. That we will get a government that cares about the people and the country. A candidate that will be able to help Philippine recover from the depression it is going through right now.