What is the main cause of poverty in the Philippines? 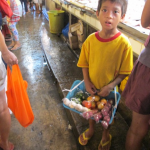 What is the main cause of poverty in the Philippines?

There are too many factors to mention that results in the Philippines struggling with poverty. Just to mention a few:
– Corruption in every area of life
– Bad infrastructure
– Failure to fully develop the agriculture sector
– High inflation
– High levels of population growth
– Filipino indolence (https://opinion.inquirer.net/80427/a-culture-of-poverty)

Philippines Poverty Rate 2000-2021
Poverty headcount ratio at $5.50 a day is the percentage of the population living on less than $5.50 a day at 2011 international prices. As a result of revisions in PPP exchange rates, poverty rates for individual countries cannot be compared with poverty rates reported in earlier editions.

What are the effects of poverty in the Philippines?

With poverty taking a toll on Filipinos, parents often can’t make enough money to support their families; children then have to be taken out of school to work in harsh conditions. Statistics show that around 3.6 million children, from ages 5-17, are child laborers in the Philippines.

Who are affected by poverty in the Philippines?

The poor in the Philippines are most likely self-employed farmers, fishermen, or other agricultural workers. Three-quarters of these people live in severe disaster-risk areas that are highly rural.

Why poverty is the main problem of the world?

Global poverty is one of the very worst problems that the world faces today. The poorest in the world are often hungry, have much less access to education, regularly have no light at night, and suffer from much poorer health. To make progress against poverty is therefore one of the most urgent global goals.

How can we help the poor in the Philippines?

There are many suggestions on helping solve the issue of poverty in the Philippines, but for me most solutions are only temporary. This is a deep routed problem and to see things change we have to deal with the basics. First issue is the lack of education. Many poor cannot afford to send their children to school because of lack of funds. That of course leads automatically to things like lack of education and child labor. So that is why I would suggest make it possible even for the poor to send their children to school. Support a child with their education and it will solve two issues at the same time.
The next issue is create jobs and help the economy so that people can earn enough to make a living and take care of their basic needs.

This is why TTN Ministry is focusing on 2 areas to help erase poverty and create a better life for those who live in the Philippines:

« The World Bank report that 80 percent of Filipino students do not know what they should know based on their current academic level (Previous Post)
(Next Post) 🎄 MERRY CHRISTMAS!!! 🎄 »
« Previous Image