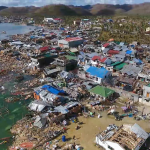 Typhoon Odette did not spare Puerto Princesa City, including several municipalities of Palawan, where it destroyed houses, uprooted power lines, damaged telecommunication towers, and land transportation is stopped due to damaged bridges.

All communication lines were down due to a cut on the fiber optic lines, specifically between Puerto Princesa City and the municipality of Roxas. Southern Palawan municipalities also do not have any means of communication due to fiber optic cut in Aborlan, a source confirmed.

Water supply in the City has been affected due to issues with the Irawan Watershed, resulting in water shortage since Friday. Puerto Princesa City Water District is directly providing water to residents in key areas in every barangay with water trucks. People are often lining up in some areas where they could gather water for consumption.

Residents along the coastal areas were heavily impacted, including houses made of light materials that were toppled down with trees and electric posts.

Four to five bridges in the City are not passable since most of them had been destroyed by the overflowing river. This made it hard for rescue efforts including provision of supplies to affected barangays and municipalities in the province.

Any donations or help would be appreciated ..
donations can be send to TTN Ministry … www.ttnministry.com/store/